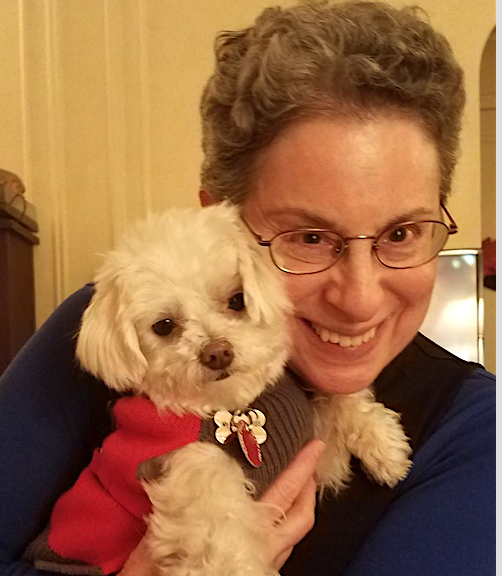 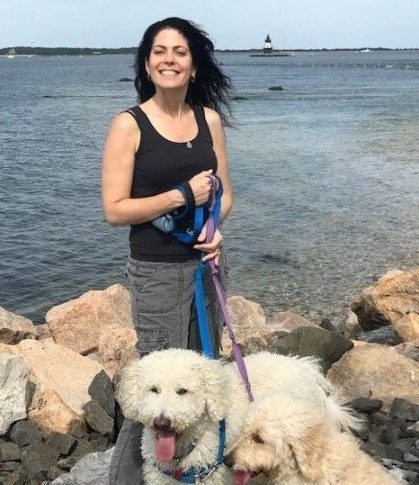 Carol Zeavin earned her BA in music from UCLA and became a successful freelance orchestral violinist and chamber musician in New York City.  She earned master’s degrees in education and special education from Bank Street College and worked with infants and toddlers from 1992 to 2010, both as head teacher at Rockefeller University’s Child and Family Center and Barnard’s Toddler Development Center, and as a special educator employed by Y.A.I. and Theracare.  She continues to perform classical music in NYC and teaches violin and piano to kids and grownups of all ages and abilities.

Rhona Silverbush studied psychology and theater at Brandeis University and holds a juris doctor from Boston College Law School. After practicing immigration law, primarily representing asylum seekers, she returned to her first loves, writing and theater. Rhona is the co-author of Speak the Speech! Shakespeare’s Monologues Illuminated (Faber and Faber, 2002) and has taught theater to all age groups from tots to adults, currently coaching actors in Shakespeare. She has taught at Columbia University Teachers College and wrote ‘wichcraft:  craft a sandwich into a meal–and a meal into a sandwich with chefs Tom Colicchio and Sisha Ortuzar (Clarkson Potter, 2009). She is also a freelance writer and editor, a consultant for families of children and teens with learning differences and special needs, a tutor, and a smitten parent and step-parent.

It’s hard for adults to understand how a toddler’s mind might work. Carol and Rhona have come together to create the Terrific Toddler series, three books that just might lend a helping hand. Here, they talk about how this series came to be and why it’s necessary.

Take it away, Rhona and Carol! 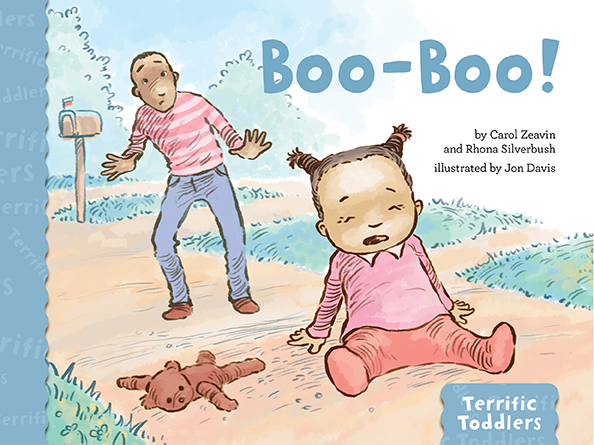 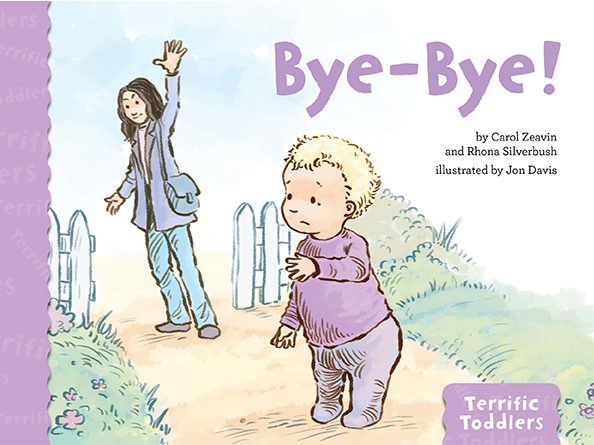 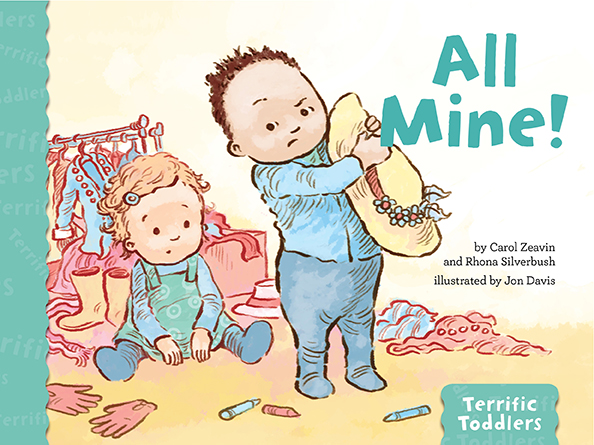 What book(s) have you written?

Carol:  These three Terrific Toddler books are my first! I did have an article published in Young Children magazine, unexpectedly, in 1997 — I had written a paper for a class on toddler environments and the professor, the wonderful Nancy Balaban, suggested I submit it to the magazine. I was amazed to see my work in print!

Rhona: I coach actors in Shakespeare and have co-written a book with Sami Plotkin called Speak the Speech! Shakespeare’s Monologues Illuminated. I also write for hire and have written a cookbook with chefs Tom Colicchio (my brother-in-law) and Sisha Ortuzar called ‘wichcraft: Craft a Sandwich into a Meal — and a Meal into a Sandwich. I’ve also co-written another book for parents about ways to help their children succeed in school, but it hasn’t yet been published. Friends joke that I’m trying to set a record for how many sections of a bookstore I can have books in that I’ve written!

What’s your normal writing process? How do you decide what topics to write on?

Carol:  My writing process is ridiculously laborious and convoluted — sort of a running joke between Rhona and me! I start by researching what other writers and researchers have to say about my topic then I jot down ideas as they come up, on whatever pieces of paper are nearest. At some point, I collate the shreds and bits on a computer document, then print out what I have accumulated, at its various stages of development. When I think I have something, the editing begins. I am very anxious about the creation process, but the editing is exciting — something exists, and now I can fix it! All along the way, there’s an unpredictable amount of tortured mulling and musing, long walks, bleary-eyed writing in a bedside notebook, and lots of second-guessing and self-doubt.

Rhona:  I’m not as tortured a writer as Carol is, though I am as painstaking. I research, and my findings spark ideas…and off I go. I love to collaborate on writing and discuss those ideas aloud to hone them. I like outlines, even for fiction, and often use them to chart out the trajectory of what I’m about to write. Then I stare at the computer screen for a very long time while I’m beginning to write in my head. I make numerous cups of tea and coffee, still writing in my head before beginning to type. By the time I’m done setting out a first draft, I’ve pretty much gone through a first edit in my head. And after stepping away from whatever I’ve written and doing something—anything—else, I then, of course, come back and read afresh what I’ve written, and I start to edit…and edit…and edit again. What do you do when you’re not writing books?

Carol:  I’m a professional violinist (I just finished American Ballet Theatre’s season at Lincoln Center), and I also teach violin and piano to kids and adults. Although I’m no longer in a professional string quartet, I love chamber music and get together with musician friends to play for fun as often as possible. And, since playing the violin is much more fun if it sounds good, I practice every day! Also, I enjoy spending time with my demanding Maltese rescue, who needs lots of walking, as do I!

Rhona: I wear many hats in the course of a week. I tutor students in various subjects; I coach both acting students and professional Broadway and film actors, chiefly in acting Shakespeare; and I write. I also have a son, two stepdaughters, and two Doodles (a Labradoodle and a Goldendoodle), so I’m pretty busy.

How does it feel to be a published author? Absolutely mind-boggling! It’s also extremely gratifying that Magination and the APA saw the usefulness of our vision and dedication to toddlers and their families.

Carol:  The book that got me started in early childhood education was Faber and Maslish’s How to Talk So Kids Will Listen, How to Listen So Kids Will Talk. The whole concept totally blew my mind. So THAT’s how it’s done! I also admire Vivian Gussein Payley’s revolutionary You Can’t Say You Can’t Play and Boys & Girls: Superheros in the Doll Corner, both of which address Payley’s hard-fought quest for peer inclusion and acceptance in the kindergarten classroom.

Mostly, though, I’m a compulsive murder mystery reader!  I must have been a pre-teen when I my mother introduced me to Agatha Christie and Dick Francis, and that was it.  I gobble up Faye Kellerman, Laurie R. King, Dorothy L. Sayers, so many more, and then because I’ve gobbled so fast, I forget what happens, so I can read them all again!

Rhona: So many favorites! Ragtime by E.L. Doctorow, The Amazing Adventures of Kavalier and Clay by Michael Chabon, and Harriet the Spy by Louise Fitzhugh leap to the forefront of my brain…today, anyway. And, of course, everything by my hero, William Shakespeare. What are your newest books about? These first three books in the Terrific Toddlers series are about three of the biggest challenges toddlers face. In Bye-Bye!, our four toddler characters, JoJo, Kai, Ava, and Jack, have trouble saying “bye-bye” to their mommies and daddies. In Boo-Boo!, JoJo falls and gets a boo-boo and absolutely does not want her patient daddy to treat it. And in All Mine!, Kai, Ava, and JoJo are at preschool together and don’t want to relinquish their toys.

What are your newest books really about? It’s hard to “unring a bell” — to un-know how the world works — and adults tend to think that toddlers understand way more than they do, now that they are ambulatory and are forcefully making their wishes known! Adults are therefore frustrated with their toddlers, while their toddlers are frustrated at being misunderstood. The books in the Terrific Toddlers series are our response to this two-way frustration. They are stories for toddlers that label and validate their feelings and behaviors, which is why toddlers love them. At the same time, though, they have the ancillary benefits of reassuring the adults that they are not alone and of modeling options for dealing with toddlers’ daily dramas as they arise. An end page for the adults at the back of each book explains the “why” of it all.

What inspired you to write this series?  When Rhona’s son was a toddler, he was in Early Intervention, and Carol was his in-home educator. For him, as for other toddlers with whom she worked, Carol would write personalized social stories to help him navigate through his world. We then looked for published books to supplement the ones Carol had been writing, and none seemed to handle the material in a manner sufficiently attentive to toddler development. Furthermore, they simply had too many words on a page and the complexity of their illustrations was overwhelming to a toddler. We envisioned a series of books that would handle the hot-button issues facing toddlers in ways that would be deeply satisfying to the toddlers, both in terms of form and content — the right story told lyrically, with simple yet accurately expressive illustrations that furthered the storytelling. And thus, the Terrific Toddlers series was born! What made you want to publish with Magination? We have long loved Magination’s books! They tell great stories that beautifully depict the inner psychological state of the child in an affirming and accepting way, and children respond. We saw Magination’s mission as perfectly complementing our own and thought that Magination was the evident home for our series. We are very glad Magination concurred about the fit!